For a long time now, Facebook users have wanted the social media platform to add more buttons than just the Like option. After months of planning and testing, Facebook rolled out “Reactions.” It’s been a hit amongst users, but how are advertisers and marketers reacting to Reactions, considering social platforms like Facebook generate most of their revenue from advertising.

New reactions are finally here! And we Like that Facebook made the new additions to their platform. The Like button often failed to accurately reflect users’ feelings about a particular post, but that’s all they could choose. The five new options of Love, Haha, Wow, Sad, and Angry now give users the choice to portray how they feel about a particular brand or product. It’s impossible to add every emotion a user might want and still maintain a clutter-free and clean News Feed, so we think Facebook nailed it with their five additions. *Like*

Users Love it! Research done by UserTesting found that 80% of participants rated the usefulness of Reactions 4 or 5, out of 5. The new options give participants the chance to quickly respond to posts without having to comment on them, which is crucial for users who spend majority of their time on mobile. So users Love them, how about advertisers? They Love it more! Advertisers will now have a better idea of how consumers are actually feeling about their brands. The difference between seeing a Like and Love can offer insights about the connection between your audience and your brand. It also wouldn’t be surprising to see engagement on posts increase as users are quickly able to leave accurate reactions on posts and ads on their News Feeds. *Love*

Wonder where Facebook actually tested these emojis? The social platform turned to Spain and Ireland to test Reactions, with the peculiar understanding that the population in both countries typicallyhave more local networks than international networks - in other words, most Spaniards and Irish users have few to no friends outside their country. While this might be an odd or even a Haha reason to test out Reactions in these countries, it does actually make sense. According to Adam Mosseri, the Director of Product at Facebook, these countries were a great match as they work well as “closed test groups”. Oddly, brilliant! *Haha*

You can also definitely bet that Facebook did extensive research in choosing the best stickers possible.One of the design directors at the company explained that in choosing the five new emotions, they had to fit the criteria of universality and expressivity.’  Wow, that’s a lot of feels to live up to. After examining the threads of one-word comments, and emojis, Facebook pulled together the most frequently used sentiment that users were feeling to create the now six different Reactions emojis. Check out the graphic below to see how the six final Reactions came together. *Wow* 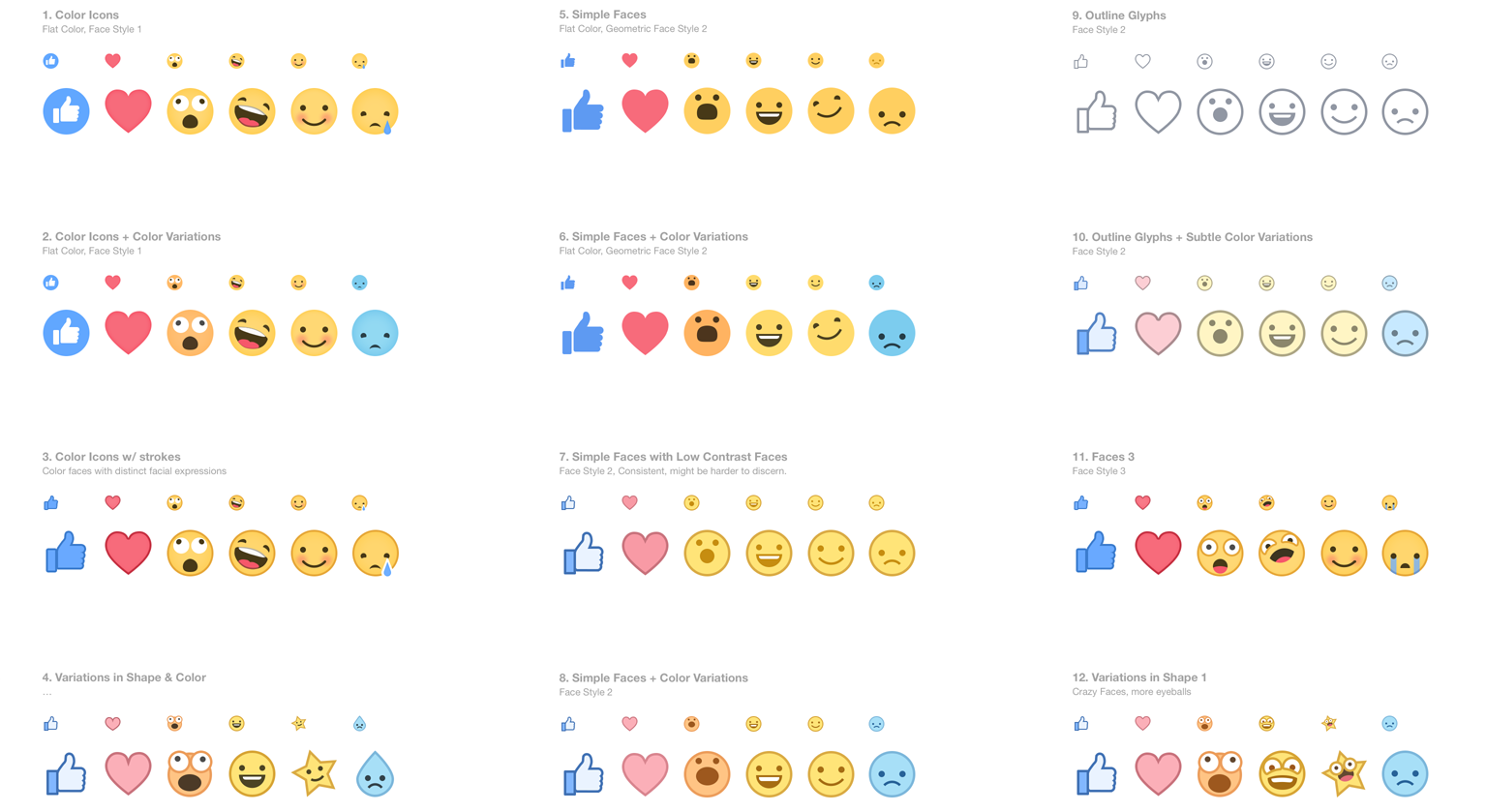 One thing that users might find Sad is the much anticipated Dislike button won’t be coming to Facebook anytime soon. After conducting much research, Facbook decided against adding the Dislikebutton to Reactions. Geoff Teehan, Product Design Director at Facebook, in his blog explained that “binary ‘like’ and ‘dislike’ doesn’t properly reflect how we react to the vast array of things we encounter in our real lives.” This isn’t a new decision as Facebook’s CEO has echoed this before, “We’re not going to build that [a dislike button], and I don’t think there needs to be a voting mechanismon Facebook about whether posts are good or bad.” So, sorry, it doesn't look like this is something that will be coming to Facebook. *Sad* but not *sad*.

Angry is what some advertisers might be feeling at the moment. The long-awaited Reactions caused users to get excited, but while advertisers do love the update, it’salso fallen a bit short for them at the moment. Why? As of right now, all Reactions are counted as Likes, and advertisers will not be able to tell the difference betweenthings like an Angry and a Like. So advertisers won’t be able to adjust their advertising or marketing based on how users are reacting to it - or not just yet. There is hope! Facebook plans to weigh each reaction accordingly to help marketers achieve greater advertising success. By targeting to people who have positively reacted to their ads, they can effectively target interested audiences. So until then Facebook advertisers, hang in there. *Angry*